The Ukraine war continues to haunt global economies insofar as inflation and declining GDPs are concerned and so, for the first time since the 1970’s, stagflation has become a reality once again. Let’s consider the likely impact this will have on South Africa.

The following chart (courtesy of Trading Economics) analyzes current inflation in Europe and a comparison with South Africa’s current rate of 7.4% is interesting in that the rate in most European countries now exceeds South Africa’s rate. The Euro Area inflation rate averages 8.9% and the effect of this is clear in the current Euro : ZAR exchange rate, with the Rand trading at R16.75 today versus R17.10 on 2 August 2022. The higher Euroland inflation will effectively weaken its currency relative to the Rand, particularly in a world-wide climate of falling GDPs in the face of rising costs and interest rates and consequent reduced demand. 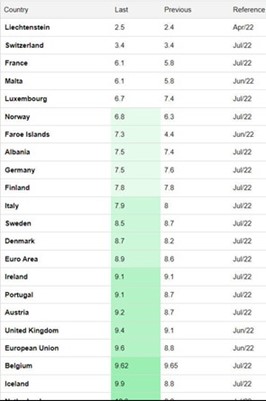 In the USA inflation is showing a decline but it is too soon to predict whether this is a long-term reversal, although the Dow Jones is treating it as such and factoring in a decline in interest rate increases, or at least in the magnitude of further increases. This index has moved from 32,708 to 33,659 in the past 6 days. In SA, the JSE All Share index has moved back above the 71,000 mark again.

To return to the stagflation analysis, the following graph considers South Africa’s inflation and GDP trends with the global equivalents. 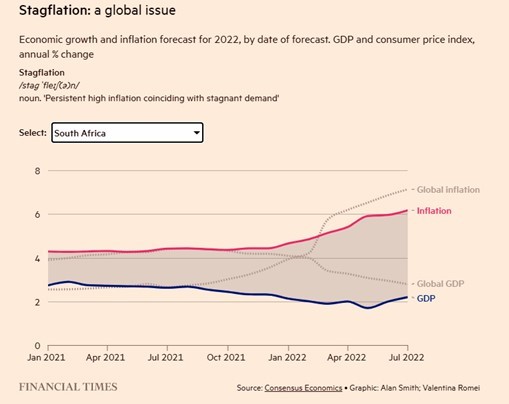 Again, the analysis is favourable for South Africa in that our GDP is climbing as Global GDP is declining whilst our inflation rate is below the global average, protecting South Africa’s currency and hence limiting the importation of inflation. In addition, South Africa’s commodity exports will continue to shelter the Rand and as the country heads into spring and summer it can expect a tourism boom, another fillip for the local currency given the materiality of this sector.

And as stated before, South Africa is largely unaffected by maize and Wheat shortages occurring elsewhere in the world pursuant to the sanctions on Russian exports and the blockading of Ukrainian exports, even though limited exports are currently occurring in terms of a Turkish-brokered moratorium on the sanctions and blockade respectively.

The message to our partner-resellers is to take advantage of the continuing relative Rand strength in pursuing Unify business and to budget for improved growth rather than preparing for a recession in South Africa going into 2023.

Manage Cookie Consent
To provide the best experiences, we use technologies like cookies to store and/or access device information. Consenting to these technologies will allow us to process data such as browsing behavior or unique IDs on this site. Not consenting or withdrawing consent, may adversely affect certain features and functions.
Manage options Manage services Manage vendors Read more about these purposes
View preferences
{title} {title} {title}